The WPT Online Series came to a close on June 2 with the $3,200 Main Event coming to an end. The event featured $3 million guaranteed with Christian Rudolph coming out on top.

Some other big names also rose to the top during the series at partypoker. Along with some big tournament action, party has also announced a nice cashback promotion for cash game players.

For his win, Rudolph becomes the first WPT champion of Season XIX. The tour recently announced its 2021 dates and Rudolph moves to the top of the Player of the Year standings.

He began the final table in the middle of the pack before surging ahead. The win came after a heads-up deal with Brazilian player Fabiano Kovalski.

Going into heads-up play, Rudolph held 150 million chips to Kovalski’s 63 million. That flipped at one point, but Rudolph later reclaimed the chip lead. The players then struck a deal that left $30,000 extra for the eventual champion. 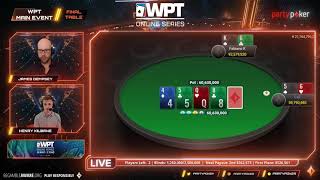 Rudolph adds to a long list of poker achievements including winning a World Series of Poker bracelet in 2020. In the WSOP Online, he took down the $25,000 Poker Players Championship for $1.8 million.

The German poker star has more than $4.8 million in live tournament winnings. He has millions more online and now also adds his name to the Mike Sexton WPT Champions Cup.

Many may remember Wiktor Malinowski for his heads-up battle earlier this year with Fedor Holz. While he may be better known for high stakes cash games, he appears to have tournament skills as well.

With two players remaining, Malinowski battled Joao Vieira for the title. With no deal struck, Malinowski came out on top for $354,791 with Vieira scoring $217,902 for second.

Cash game and fastforward players are in store to claim an additional 10% cashback at partypoker. The promotion begins June 7 and runs four weeks with money awarded weekly.

“By offering our loyal players an additional 10% cashback, we are giving back more to players, and helping players of all levels enjoy more games on partypoker,” partypoker director Vadim Soloveychik said in a news release.

“Busier cash game and fastforward tables during the traditionally lower-volume summer season will be great for everybody.”

Players who rack up 600 cashback points in a week in any game type are eligible for the boosted cashback.

Players earn 1 point for every $1 in rake they generate. Points are earned through all game types, not just cash games or fastforward. Cashback reward payouts are made every Tuesday during the promotion.

“It’s great to see partypoker give back even more to cash game players,” Team partypoker’s Jaime Staples said. “I think we are doing a good thing here to continue to promote and grow cash games. It has always been an important part of poker, and needs to grow alongside tournaments, SPINS games, and sit & gos.”

★★★ Ready to get in the action at partypoker? Click here for a complete site review with exclusive PokerScout bonus offers. ★★★