Live poker continues to return around the world and Triton Poker has now become the latest to add to that movement. The tour announced the launch of its 2022 schedule last week with one major event unveiled.

From the World Series of Poker and World Poker Tour to the European Poker Tour and 888poker Live, the tournament scene is returning to action. The Triton high roller events now become a part of that with a high stakes series on the horizon.

High roller action back to the felt

The Triton Poker Super High Roller Series Bali is the first stop on the series and is headlined “A Helping Hand for Charity.” Players will find 12 tournaments running Feb. 17 to March 1.

The series features several poker variants with buy-ins ranging from $30,000 to $200,000. The high roller series has produced some massive moments at the tables and added some charity angles in recent years.

In 2019, that meant more than $3million raised and distributed to various charities around the world. Some of those groups’ efforts include improved health and sanitation, community development, and disaster relief.

“We are thrilled to finally be back and continue our efforts in creating awareness and to give back to the less fortunate communities,” Triton CEO Andy Wong said in a news release.

“This is still very much a part of our business initiatives, and we will be taking it a notch further with on-ground involvement. We will continue delivering expansive coverage of our highly anticipated season kick-off to our growing audiences across multiple platforms and look forward to presenting the thrills and excitement our tournaments have to offer.”

The series has regularly attracted some of the biggest names in poker including Tom Dwan, Bryn Kenney, Jason Koon, and others. The new series plays out on one of the world’s most inviting tropical locations.

The island offers visitors natural beauty, looming volcanoes, and iconic terraced rice fields. Bali’s scenery and rich heritage will be showcased during coverage of the event. 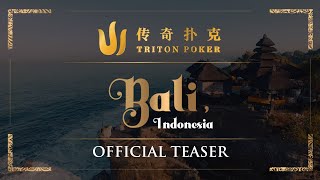 Along with the announcement of the series’ return, Triton also introduced Jacob & Co as the official timekeeper for the event. The company is developing a limited-edition timepiece with a design that suits the poker world.

“This milestone is a major move for Triton Poker Series in its vision to continuously innovate live poker tournaments, bring exclusive and exhilarating live poker entertainment anytime, anywhere all the while channeling meaningful charitable initiatives to the less fortunate,” Triton noted in a news release.

Company officials hope to continue growing the brand, and streaming and broadcast are a major part of that. Triton plans more than 10 hours of daily live coverage across 13 days as part of Triton’s direct-to-consumer platform, Triton Poker Plus.

The tour’s official YouTube channel will also stream the action from Bali.

“Significant live coverage is a key cornerstone in our business,” Wong said. “We are grateful to our partners for the continued support and expanding the reach of Triton Poker Series to today’s platforms and fueling the significance of tomorrow’s champions.”

This announcement of the tour’s return comes as Triton is also planning a new multi-city tournament tour.

“We have been working hard to elevate the way we host our live events post-COVID,” Triton head of business development Chng Zhen Wei said. “The pandemic has allowed us to re-evaluate innovative ways to raise the bar during our live broadcasts. Our partnership with Jacob & Co will bring more value to each and every televised event of our broadcasted tournaments.”