After the recent release of its new online poker software, 888poker has now revamped its tournament schedule. The changes are meant to please more recreational poker players.

The new mobile app and software client is named “Made To Play” and offers a better poker environment. Now the entire platform is working to live up to that name.

The new tournament lineup and schedule has been completely reorganized with new events also added. That includes some nice prize pool guarantees.

What can 888poker tournament players expect?

888 is making an effort to bring more people into online poker. That means reaching players who may not be out to play as much online poker but still enjoy playing nice events.

This new collection of tournaments adds to those efforts and also appeal to more avid players. The new events include:

The site has also added higher guarantees with more than $500,000 paid out each week. Tournaments have also been redesigned to be shorter, meaning less of a time commitment for average Joe players. 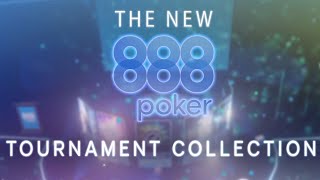 Here’s a complete look at the schedule for some of the bigger new events throughout the week.

To celebrate the new tournament schedule, 888poker is getting in the giving spirit. The site is offering players $200,000 in tournament tickets for the new events from Feb. 25 to April 2. Players can earn tickets through:

Additionally, daily “no ticket needed” freerolls will also be rewarding seats and tickets to winners. These events will give away the majority of tickets throughout the promotion.

Along with these giveaways, 888 is also currently running the 24/7 Freerolls Festival. The series offers players more than $100,000 in round-the-clock freerolls running Feb. 10 to March 2. It’s a busy few weeks for 888 with plenty of value for players.

Who doesn’t like free money? That’s a fitting question this month at 888poker with gratis cash the theme of the upcoming 24/7 Freerolls Festival.

The site is giving away more than $100,000 in the series, which runs Feb. 10 to March 2. Players will find round-the-clock freerolls at the 888poker tables during this three-week period.

It certainly pays to play at 888 in this series – with no tournament fees required.

Taking a shot at free money with 888poker

The 24/7 Freerolls series allows 888 to thank the site’s players and brings plenty of action. Players can participate in one of three types of freerolls:

The action may be free, but the series is only open to depositing players. 888poker is making it worth the while however, for those who create an account and deposit. Beyond the freeroll festival, there are also numerous other opportunities in February and March. The site is celebrating the recent launch of the new Made to Play poker software and app.

With the new Gift Drops promotion, players at one lucky table will get hit with up to $1,000 in extra prizes. Those can range from tournament tickets to BLAST tickets to cash.

There is even more on the line as part of the Made to Play celebration. 888’s Daily Happy Hour specials also offer players a chance at some extra prizes. The Happy Hour celebration days include:

888poker is going above and beyond to bring players plenty of value. There is plenty of cash on the line just for logging in and playing for free.