Players at partypoker may soon be seeing the site’s logo as part of the Formula 1 auto racing circuit. Party’s parent company, Entain, announced a deal earlier this week with McLaren Racing that starts this year.

The multi-year deal will feature the partypoker and PartyCasino brands and officially begins Sunday at the Monaco Grand Prix.

“We are immensely proud to be partnering with McLaren Racing, a team who are synonymous with creating thrilling entertainment by constantly innovating and staying at the cutting-edge of technology,” Entain CEO Jette Nygaard-Andersen said in a news release.

“This is the same approach we take in providing moments of excitement for our customers and we are truly excited about the opportunities we have to create new content for our PartyCasino and partypoker customers as well as bringing these great brands to new audiences.”

A look at the Formula 1/partypoker deal

Company branding will appear on the halos of McLaren MCL35M race cars as well as driver Daniel Ricciardo’s helmet.

The Australian has been driving in Formula 1 since 2011 and currently sits seventh in the circuit’s standings. The agreement goes beyond the racetrack as well.

Entain will offer player and racing fans a range of dedicated content and exclusive experiences. A new activation platform called “Access” will feature:

Additionally, Entain will use the partnership to explore strategies to promote safer betting and gaming. Party hopes to benefit “from the team’s unique perspective on maintaining control and managing risk.”

“Fan entertainment is a major focus for our team and sport,” McLaren Racing CEO Zak Brown said. “Like McLaren Racing, Entain brands such as PartyCasino and partypoker place a high importance in providing moments of safe and responsible excitement for their customers.

“We look forward to starting our partnership with Entain from this weekend’s Monaco Grand Prix and the activity we have planned together in creating moments of excitement for fans and customers.”

WPT series rolls on at partypoker

On the poker felt, the WPT Online Series is currently underway on partypoker’s international platform. The festival runs through June 2 and offers players a chance to add their name to the Mike Sexton WPT Champions Cup.

The series got off to a good start on May 14 with the $33 Pro Hunt featuring team partypoker players and special guests. The event promised a $30,000 guarantee and attracted 1,788 players for a $53,640 top prize.

Players busting any pros or guests earned a mystery prize ranging from a $33 ticket to a $320 Mini Main Event seat.

Brazil’s Douglas Souza took home a $3,200 seat to the $3 million guaranteed WPT Online Series Main Event. He was streaming his play on PokerStars’ Brazilian Twitch channel when he won the event. 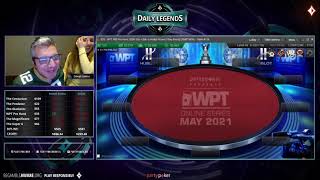 In other news, one of the winningest players in poker also scored a title early in the series. Steve O’Dwyer took down the $5,200 WPT High Roller Turbo on May 18.

Here’s a look at the events remaining in the series.

★★★ Looking to get in the action at partypoker? Click here for a complete site review and exclusive PokerScout bonus offers. ★★★