Another major tournament series returns to partypoker this week with the online debut of the World Cup of Cards. The 12-event festival runs June 16 to July 8 and features mini versions of each tournament.

The series is normally hosted by Playground Poker Club in Quebec, Canada. However, the 2021 version will be online and is open to all players, not just those in Canada.

Party is planning plenty of action with qualifying opportunities for players of all bankrolls.

The company even planned key events to fit around this summer’s European Football Championship.

The $55 Grand Prix Knockout kicks off the series on opening day and comes with a $250,000 guarantee. The tournament features several starting flights before wrapping up on June 24.

The three-day $1,100 Main Event includes a $1 million guarantee with starting flights on June 27 and July 1 and 4. An additional Day 1 turbo is set for July 5.

The final table plays out on July 8 and partypoker notes that the day “avoids a clash with any major football matches.”

Another interesting event is the $320 Playground Cup, which comes with a $125,000 guarantee. The event is set for June 25-27 with four starting flights.

Players can also check out the $33 mini version of the tournament with a $50,000 guarantee. All events feature No Limit Hold’em and additional side events may be added to the schedule in coming days.

Lower cost options to get in the action

Partypoker has worked to make the World Cup appeal to players of all bankrolls. The site has a comprehensive satellite plan for the series including for the main event.

Players can qualify from just $0.01 and 20 tickets are awarded every week. A trip to play in Canada may not be possible, but partypoker hopes the action online fills the void.

“I’m looking forward to partypoker bringing the World Cup of Cards online,” Team partypoker’s Kristen Bicknell said in a news release. “I’m missing playing at Playground, which is such an exciting place to play live, but hopefully we will see this series back there soon.

“In the meantime, I’m most looking forward to the Main Event, which should be a great tournament. As always, there will be great satellites running, but if you don’t manage to make it through, the $5.50 and $55 Grand Prix tournaments are a helpful lower-stakes option.”

Here’s a look at the complete schedule.

★★★ Ready to get in the action at partypoker? Click here for a complete site review with exclusive PokerScout bonus offers. ★★★

Three players at 888poker recently hit it big in one of the site’s Blast Jackpot Sit and Go’s. These lucky rounders turned $100 buy-ins into a share of the $1 million prize pool in less than 10 minutes.

Blasting off for six figures at 888poker

Blast Jackpot games are three-handed tournaments with a random prize pool determined before the event begins. Players receive a starting stack of 1,500 chips and begin play like a regular tournament.

The blind structure and prize pool distribution of each Blast game is set according to the multiplier.

After a certain amount of time, the games move all three players all in every hand until only one remains. The $1 million prize pool doesn’t come up often, but these three played for the top prize of $700,000.

“I couldn’t even believe it,” one of the winners told 888poker. “Only the next day I realized that it was true – I won a jackpot. I´m super excited and can’t thank you enough.” A look at the big winners

Two of the Blast winners hail from Canada and one from the United Kingdom. Each player won a portion of the million-dollar prize. Here’s a look at the winners:

One winner said the first thing he’d do is “pay a few bills and put money in savings.”

Plenty of action at 888poker this month

It’s been a busy couple months at 888poker. The site announced a partnership with the World Poker Tour’s Deepstacks series recently.

888 will be hosting WPTDeepstacks London Online from April 18-26 with a guarantee of $2 million.

The site will also host numerous freerolls throughout the series. That includes giving out $200,000 in tickets to qualifying events.

Satellites are already underway. 888 will also offer four live streaming events on the site’s Facebook and YouTube channels. For a complete schedule of events, click here.

The win brought plenty of loot for Hardcastle. Along with the $447,859 top prize, he took home a $15,000 seat to the next WPT Tournament of Champions.

His name will be engraved on the Mike Sexton WPT Champions Cup and he’ll receive a replica of the trophy. A Playground Poker Club championship belt with his name engraved also heads his way. It was quite a series for the WPT and party.

A look at the WPT championship at partypoker

The Main Event was the highlight of WPT Montreal Online, which began on Jan. 17 with 24 events. The annual series was shifted online due to COVID-19. Montreal’s Playground Poker Club has been closed since Oct. 4.

The Main Event officially finished on Jan. 27. When Dan Shak busted out third for $212,458, Hardcastle and Lebanon’s Rayan Chamas battled heads-up for the title.

Hardcastle held almost a 2-to-1 chip advantage. The win was sealed when he called a triple-barrel bluff by Chamas.

When the hands were revealed, Hardcastle tabled two pairs to Chamas’ King high. Chamas banked $308,703 for his runner-up finish.

The $10,300 Mike Sexton Classic was another popular event on the schedule and concluded on Monday. Canada’s Daniel Dvoress took down the title to win $294,346.

The tournament also included a charity element, with $39,900 raised for a nice cause in the process. The $300 registration fee from each buy-in was donated to the Nevada Partnership Homeless Youth (NPHY) Charity.

The group aims to end youth homelessness in southern Nevada and was chosen specifically by Sexton’s family.

The Sexton Classic ran across two days and comfortably beat the $1 million guarantee. The tournament attracted 125 players and a $1.3 prize pool.

A total of 20 players qualified for the second day of action, eventually leaving Dvoress heads-up against Aram Zobian. Despite Zobian holding a lead of 3 million chips, Dvoress turned the tide and battled back.

The final hand saw Dvoress hit a back-door straight on the river to top Zobian’s pair of queens. Zobian won $200,307 for runner-up.

There were plenty of other standout moments in the series. Addamo added another major buy-in win to his resumé. The Australian took down the Super High Roller for $450,076.

A couple of players from the Netherlands found the winner’s circle. In the Six-Max High Roller, Jelle Moene finished first and took top prize of $80,981. Tom Talboom won the Mini Main Event for $42,052

In the Micro Main Event, Thomas Clucas claimed the top prize for $7,686.

More to come from partypoker

The Montreal event may be in the rearview mirror, but plenty of action remains in February. The partypoker MILLIONS Online runs Feb. 13 to March 9 with 28 events and $17.55 million guaranteed.

The site is offering numerous ways for players of all bankrolls to play, including events starting at just $0.01.

Beyond that, partypoker is also offering numerous qualifiers for the upcoming WPT Russia. The event is co-branded with partypoker LIVE and is one of several major live events returning to the felt.

★★★ Ready to get in the action at partypoker? Click here for a complete review and exclusive PokerScout bonus offers. ★★★

The partnership between World Poker Tour and partypoker continues with the WPT Montreal now heading online in January. While a complete schedule hasn’t been released yet, the $3,200 championship features $2 million guarantee.

The two starting flights for that event are set to kick off Jan. 10 and 17. WPT Montreal Online now replaces the annual live series at Playground Poker Club in Kahnawake, Quebec, Canada.

“The World Poker Tour and partypoker continue their thriving partnership into 2021 as we look forward to crowning another WPT champion online,” WPT CEO Adam Pliska said in a news release. “Players around the globe have shown their support of WPT Online and the continued prestige on display at our final tables.”

Patrick Serda took that title for $668,388 and many may remember his amazing call to finish off Zajmovic. 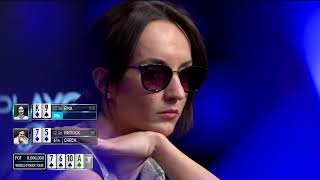 The Playground Club closed on Oct. 4 after the Kahnawake COVID-19 Task Force raised the pandemic status from orange to red. The Canadian government has also restricted travel from the US, keeping any possible American poker players away.

The series now moves online offering players around the world a chance at some WPT glory. The Montreal event also marks the seventh WPT champion to be crowned on partypoker in Season XVIII.

As in a live event, the winner of WPT Montreal Online receives:

Qualifiers for the event are already underway and start at $.01. A full schedule is expected to be released soon.

“I can’t tell you how excited I am about WPT Montreal being played out on partypoker,” partypoker LIVE president John Duthie said. “Playground is one of my favourite places to play on the globe and the players there are just such a great community.

“As the scene of his famous WPT victory, it was also one of Mike Sexton’s favorite stops on the tour; he’ll be with us all in spirit I’m sure.”

Series adds to a growing WPT presence online at partypoker

With WPT Montreal Online, players can expect a similar experience to the recent WPT Online Series and WPT World Online Championships. For those series, partypoker made use of:

The two series focused on getting players into the action, no matter the bankroll. That is expected to continue with the Montreal series.

The WPT Online World Championships were held in August and September, awarding $101 million. The series also gave out 45,000 tournament seats via qualifiers.

The WPT Online Series was held in April and May with $52 million paid out. The tour has incorporated its main brand as well as WPTDeepStacks and WPT500 in some of these series.

The operator’s partypoker US Network arm has also partnered with WPT for online events in New Jersey. These efforts now continue with WPT Montreal and the festival’s popularity in Canada should help.

Players from Toronto to Vancouver can still get in on the action via partypoker. Like these other recent events, poker fans should expect plenty of streaming coverage via the WPT Twitch channel.

“Another exceptional event for players comes to partypoker this January,” WPT Europe Vice President Hermance Blum said. “The proven success of limited re-entries and real names carries over to WPT Montreal Online and we are excited to be partnering once more with partypoker.”

Look for a complete schedule at PokerScout soon.

♠♠♠ Ready to get in the partypoker/WPT action? Click here for a complete partypoker review and exclusive bonus offers. ♠♠♠